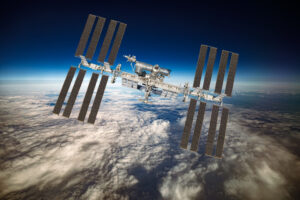 International Space Station over the planet earth. Elements of this image furnished by NASA.

Article 5ter of the Paris Convention for the Protection of Industrial Property, which provides for certain limitations of the exclusive rights conferred by a patent in the public interest in order to guarantee the freedom of transport (doctrine of temporary presence). The question is then whether the doctrine of temporary presence also applies to space objects, for example, in the case of the transport of patented articles to or from a Space Station through a launching site in a foreign country.

The space technology has long been one of the most advanced technical areas in the world, and outer space activities are, in fact, the fruit of intellectual creations.

” As regards inventions made and/or used in outer space, one of the issues frequently raised is the applicability of national/regional patent law in outer space. While patent protection is subject to the applicable territorial legal framework, according to international space law, the state in which the space object is registered retains jurisdiction and control over that space object. The question arises as to whether the territorial jurisdiction under intellectual property law permits the extension of each national (or regional) law to the objects which the respective country has registered and launched into outer space. In the absence of explicit international rules, under a number of international agreements concluded with respect to international space projects, registered space objects are treated as quasi-territory for the purposes of intellectual property.

As prescribed in Articles I and II of the Treaty on Principles Governing the Activities of States in the Exploration and Use of Outer Space, including the Moon and Other Celestial Bodies (Outer Space Treaty), the exploration and use of outer space for the benefit of mankind and the non-appropriation of outer space by any nation are fundamental principles under international space law. While recognizing the importance of intellectual property for the exploration of outer space and the further development of science and technology, questions have been raised as to whether the protection and enforcement of intellectual property rights may conflict with the said fundamental principles in terms of access to knowledge and information derived from space activities and in terms of the freedom of exploration and use of outer space.”